Last night I stumbled across one of the most inspirational and best-presented documentaries I’ve seen in years. Typically it was on in the middle of the night and a brief summary (a history of statistics presented by a Swedish professor) might make you think it was one from the early canon of Open University spectaculars.

However, Professor Hans Rosling is one of the most exciting and engaging presenters I’ve seen on television in a long time. After a long day in the office, his quirky, amusing and insightful jaunt through the past, present and possible future of statistics was gripping. If you missed it, you can look at The Joy of Statistics on BBC iPlayer.

One of the most engaging aspects was his demonstration of how the stories of numbers are often best told through visual depiction.

For instance, I had no idea that Florence Nightingale was a statistician. It was her meticulous record-keeping translated into startling pictures that drove the changes in nursing that she instituted:

Over a hundred years later, people like David Mccandless make their living finding ways to translate complex information into more readily understandable pictorial form.  On his Information Is Beautiful blog he finds different and exciting visualisations of statistical data. The Billion-pound-o-gram is his way of making those mad, large numbers more comprehensible: 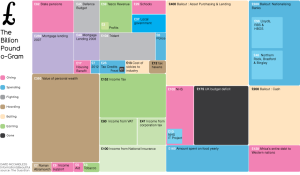 Perhaps the most spectacular use of animation was Professor Rosling’s depiction of the progress of countries in terms of their life expectancy and their income. His enthusiasm, love and knowledge are a real joy to behold. To really see a story told in numbers, watch this little snippet below: