I am very excited to be able to say that I have finally published my collected poems in a single volume. Like my blog, it is also called ‘Fragments and Reflections’ and is available in hard copy, under my Lone Crow Publications label, direct from Lulu and also from Amazon. For those of you who prefer an eBook, you can buy Fragments and Reflections from Amazon, Barnes & Noble (nook), iBooks and Kobo. You can download the free sampler here.

What kind of poetry is it? I would describe it as a collection of modern verse for every facet of life and for every emotion. There are poems born out of love, of dreams, of wandering in the countryside, of working in the city and of generally raging against the world. Nature, the city, love, lust, betrayal, war, death, homelessness, spaniels… You will find them all inside.

If you take a peek inside, I hope you find something that speaks to you. 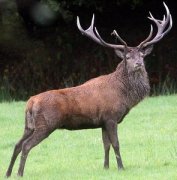 “It is very strange, and very melancholy, that the paucity of human pleasures should persuade us ever to call hunting one of them.”
Samuel Johnson (1709-84), Anecdotes of Samuel Johnson

In October 2010, reports appeared in UK newspapers proclaiming that the Emperor of Exmoor, a giant stag given his name by photographer Richard Austin, had been shot. The red deer stag is the largest indigenous mammal in the British Isles and at almost nine feet tall, and weighing 300 pounds, the Emperor was a magnificent example of its kind. The Guardian reported that he was shot and killed close to the Tiverton to Barnstaple road at the height of the mating season and quoted Peter Donnelly, an Exmoor-based deer management expert, saying it was a disgrace the animal had been shot during the mating season: “The poor things should be left alone during the rut, not harried from pillar to post. If we care about deer we should maintain a standard and stop all persecution during this important time of the year.”

I’ve never been an absolutist on hunting. I understand the need for there to be management of herds and for vermin to be controlled. I worry, too, that so many children today have no understanding of where their food comes from. (In one recent study by the British Nutrition Foundation, 18% of primary school children thought fish fingers came from chickens.) However, I have never been able to reconcile myself to the pointless destructiveness of trophy hunting.

It’s more than a vague feeling or an intellectual opinion. It is a very physical and emotional response to the idea that man (and it is usually men, not women) has to prove himself by killing other creatures, for no other reason than the sheer hell of it. I first encountered that response as a child, reading Willard Price’s Safari Adventure, and it has remained with me ever since. To my mind, such testosterone-addled, adrenalised thrill-killing demeans us as human beings.

Fast forward to 15 March 2014 and in today’s Daily Mirror are two stories which reveal that our appetite for momentary glory at the expense of the animal kingdom is as great as ever it was.

First of all, poachers hunting for antlers have killed a New Forest deer known as the Monarch. According to the report, the poachers used a calibre of rifle too low to kill cleanly and instead the deer, badly wounded, drowned as it tried to swim to safety.

Spend a moment imagining the sequence of events. Spend a moment imagining the fear that magnificent creature experienced as the bullet crashed into its flesh. The pain as it tried to get away from violent intruders into its safe space, its fight-or-flight response leading it to crash towards a familiar stretch of water that had been a place of rest and refreshment for sixteen years. Think about its desolate coughing bleat as it limped towards death. And then those last, terrified gasps as it drowned, its exhausted body weakened further by blood loss.

All because greedy, vainglorious men wanted to hang its antlers on a dining room wall.

And then, across the Atlantic, the story repeats itself. A different country, yes, a different animal, yes, but once again actions that lead from that same ignorant bravado of inadequate men. Unlike the two deer, the protagonist has been only too happy to be associated with his ‘triumph’. A cretinous redneck who’d not be out of place in a North Carolina remake of Deliverance, Jett Webb is shown posing proudly with his ArmaLite AR-10, resting on his kill – a giant 36-stone wild boar nicknamed ‘Hogzilla’ that had become the stuff of local legend. He shot it in the Indian Woods area of Bertie County, having hid out in the woods at night, but there was no Hemmingway-esque poetic reflection on this particular kill.

“The sweet-tasting corn and a night-hunting light was too much for this oversized heap of pork chops.”

What ignorance. What pointless cruelty.

In the deaths of the Emperor, the Monarch and Hogzilla we have gained nothing and lost much. Gone are the chances for stories that make a place, that lend wonder to those exploring for the first time, the “what if…?” and the “perhaps we might…!”. Gone are the chances for a glimpse of nature’s magnificence made manifest in three animals whose unassuming majesty had the potential to induce wonder in inquisitive young minds.

And, as usual, greed will be excused as endeavour by those that celebrate and justify this pointless pursuit.

Out in the meadow and I saw these leaves. So time for a quick snap and my first posting from the Samsung Galaxy S2.

Over the years, the Metro newspaper has had some great pictures in it. Today’s Metro had another example of brilliant wildlife photography with sea otters snoozing off the coast of Moss Landing, California. Beautiful!

Sometimes an event defies description. Sometimes only pictures can capture something that touches people in different ways around the world.

Below is a series of pictures taken from different sources showing the drama and beauty of the weekend’s “super moon”.

Credit given wherever information available.