Scientists and historians have done their best to debunk the Curse of the Pharaoh, the inspiration for plenty of hammy horror movies and said to be the cause of death of Lord Carnarvon, the sponsor of Howard Carter’s expedition into the tomb of King Tutankhamen. Arguments have been made in the pages of the Lancet for aspergillosis, basically a fungal spore infection. Egyptologist Dominic Montserrat believed that it originated with a very odd 19th Century London twist on the traditional striptease, where actual mummies were unwrapped on stage.

So whilst the world’s finer minds have done their best to banish the spooky imaginings of over-imaginative teenage adventurers, experts are at a loss to satisfactorily explain the strange phenomena of an ancient Egyptian statue that seems to turn all by itself.

The statue of Neb Sanu stands 10″ tall and has been with Manchester Museum for eighty years. Resident Egyptologist Campbell Price noticed one day it had turned round so put it back in its place. The next day it had moved again. Price decided to set up a time lapse camera to record it.

Renown physicist Brian Cox has said it is probably caused by differential friction, the footsteps of visitors causing vibrations that, together with imperfections in the glass and the statue’s inertia, cause it to rotate. Price is quick to remind us that this explanation would make sense if the statue hadn’t sat in the same place for years.

The romantic in me likes the idea of there being some sort of mystical explanation. The rationalist in me accepts it is probably some strange quirk of physics.

Whatever the explanation, it makes for one hell of a time-lapse video.

We often grumble about the potholes that seem to appear overnight. Water freezes into ice, placing stress on an already cracked pavement or road, and the chunks of surface between the cracks are dislodged. Rain washes away more and more and before long we realise that what was once just a small depression is now a ruddy great hole, in danger of ruining our bikes and cars. (Those – usually Lib Dems – with a greater than normal interest in them can read more about potholes.)

One of the most shocking stories in recent years comes from Guatemala. For weeks local residents in Guatemala City had heard rumblings and had no idea what was causing them. Then, suddenly, in February 2007, the ground suddenly fell away 30 stories almost instantly. It is quite breath-taking, both in its geometry and scale, two dying and a thousand being evacuated.

I can’t imagine it. Going to bed one night, everything as you expect it, the next day seeing a hole in your back garden hundreds of feet deep. Somehow, we develop a sense that nature changes slowly. Sinkholes join earthquakes and other “sudden change” phenomena that somehow seem unnatural. 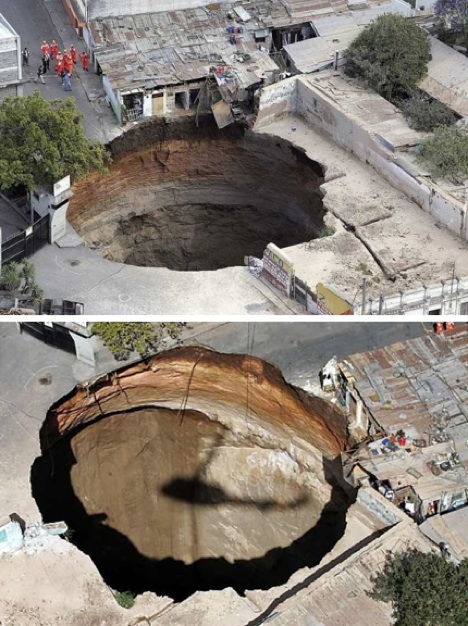 In Venezuela, there is a flat-topped mountain which is punctuated with the Sarisariñama holes, four sinkholes that are particularly beautiful to look at. Each is a self-contained eco-system, some supporting species found nowhere else on Earth.

For more information, the Sinkhole Report logs new sinkholes in urban and natural settings. Below is a gallery of these strange, beautiful but terrifying phenomena.

And finally, and judging by its record with Essex potholes, I hope Essex County Council doesn’t have to deal with one of these any time soon.

Bit risky this for a Sunday morning, bearing in mind what folks may have been up to the night before. But anyway… Found these brain-bendingly fun. I’ve always been a sucker for an optical illusion.

Coming from a farming family who, in latter days, have kept chickens and ducks, whilst growing large quantities of over-sized vegetables, I have always taken a philosophical view of nature’s brutalities and the fact that foxes are a constant threat.

In my youth I was a fan of Roald Dahl’s Fantastic Mr Fox, which I regard as a witty and subversive take on things agricultural. They are very easy to over-romanticise, with their handsome looks and lithe movements, and you can forget that actually they are cunning little devils capable of slipping bolts, climbing wire and flicking hatches. when it comes to chickens, they’re not above killing the lot and taking only one or two.

Funny then (though not for the fox), to read in Metro about a very different turning of the tables.  Chickens lend themselves to groansome puns, so the journo has some fun with “a murder most fowl”.

Anyway, it would appear that chickens in Basildon are made of sterner stuff than your average Rhode Island Red. Dude the cockerel, Izzy, Pongo and Pecky clearly had other ideas than becoming the latest take-out meal for a passing fox. I can only imagine what Michelle Cordell feeds them on. (I have a sneaking suspicion that I know where these chickens hang out!)

Hats off to Basildon’s tougher breed of chook.