In 1992, the United Nations designated March 22nd as the World Day for Water in Resolution 193 of the Forty-seventh Session of the General Assembly.

The World Day for Water was first proposed in Agenda 21 for the 1992 Rio Summit, the meeting that hugely raised awareness of the role of local government and local communities in tackling global environmental and climate issues.

Since 1993 the day has been observed consistently, drawing attention to the plight of the estimated one billion people plus who each year have to rely on dangerous sources of water to survive.

Having travelled a little in India and Africa,  turning on a tap and being able to drink a handful of clean, cold water is still something for which I am profoundly grateful. Whilst it is easy to take it for granted, when I think about it I can’t begin to imagine what it would be like not to have it.

A year or so ago we had a small taste of what it was like to lose our mains supply for just a few hours. The sense of worry as you wonder when you might be able to wash clothes or make drinks again is out of all proportion to the scale of a relatively small inconvenience. It does, however, cause you to pause and consider how it would be to have to walk miles a day to a potentially polluted stream and draw water you’d be uncomfortable watering the garden with.

The IRC International Water and Sanitation Centre reports the stark analysis of the World Health Organization:

Each year more than 1 billion of our fellow human beings have little choice but to resort to using potentially harmful sources of water. This perpetuates a silent humanitarian crisis that kills some 3900 children every day and thwarts progress towards achieving the Millennium Development Goals (MDGs). The consequences of our collective failure to tackle this problem are the dimmed prospects for the billions of people locked in a cycle of poverty and disease.

The root of this underlying catastrophe lies in these plain, grim facts: 4 of every 10 people in the world do not have access to even a simple pit latrine and nearly 2 in 10 have no source of safe drinking-water.

Thankfully, the appalling situation is not something that the UN/WHO are prepared to see continue:

To help end this appalling state of affairs, the MDGs include a specific target (number 10) to cut in half, by 2015 the proportion of people without sustainable access to safe drinking-water and basic sanitation. In addition, the UN Millennium Project Task Force on Water and Sanitation recently recognized that integrated development and management of water resources are crucial to the success or failure of all the MDGs, as water is central to the livelihood systems of the poor.

Among the more innovative ideas for drawing water to the surface, one particularly caught my attention, marrying the desperate need for fresh water to a completely different and endless resource: the playful, optimistic energy of children.

Water for People provides a very clear explanation of how these amazing inventions work: 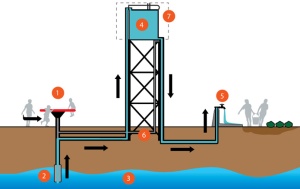 Innovations such as this, which show the application of creative, lateral thinking, create a real hope that the challenge of providing clean water can be met. Days such as the World Day for Water play a crucial part in alerting all of us to the need to act sooner – not later.

The video below, again from Water for People, is quite uplifting.

Finally, by way of a footnote, I clearly should have written this yesterday – but being tired after a long day I didn’t. So my apologies for lateness (something I seem to do far too often).