As Syria prepares to celebrate 64 years of independence, the European Union continues to work towards cementing relations with Syria through its EU-Syria Mediterranean Association Agreement. Maureen Thomas, however, has alerted me to a demonstration outside the Syrian Embassy to remind the world that despite its reformist rhetoric, peaceful and democratic reformers such as Kamal Labwani, Anwar Bunni, Haithem Maleh and Muhannad Hassani are still locked up on trumped-up charges in defiance of Syria’s commitments on civil and political rights.

In an email to Maureen, Iyas al-Maleh, son of imprisoned human rights champion Haitham al-Maleh, thanked her for mobilising support for the demonstration, to be held at 3pm on Saturday 17 April, 8 Belgrave Square, London, SW1X 8PH. Similar demonstrations are already planned for Brussels and Washington, with work ongoing to organise similar protests in Berlin, Geneva and Paris.

If you are a friend and supporter of Kamal, and his fellow prisoners, please see if you are free and visit the sign-up page to register:

News of the proposed demonstration comes at the same time as the UNHCR reports that the Syrian regime continues to harass its political internees. It makes for upsetting reading and you are left wondering at the strength of men who still find the courage to defy the authorities even in Adra prison, preferring to surrender their visiting rights instead of succumbing to the indignity of being forced to meet family in prison garb.

So please see if you are free on 17 April and make a standard for freedom of conscience and human rights. 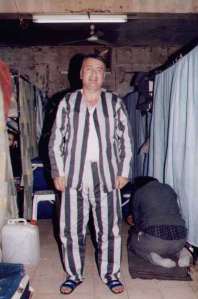