Waking this morning I didn’t expect to open my inbox to discover something to make me literally shake with rage.

In recent days I have blogged on “The Woodsman”, Dave Chapple’s carved sculpture that he gave to the people of Basildon. Yesterday, members of Basildon’s arts community celebrated his work – and mourned the Council’s decision to remove “The Woodsman”.

Back in 2008, Basildon District Council decided to consult on the future of “The Woodsman”. In the original press release , unattributed assertions are made that “it was never meant to be outside for long periods” and that “to keep it outside will require extensive treatment and could cost thousands of pounds”. No officer or councillor puts their name to the quote – it stands there as a nugget of wisdom dispensed on high from people who clearly want to give the impression that they know what they are doing and that they understand how to care for such fragile works of art (the press release later makes clear that treatment would mean it could stand for a further ten years before more treatment).

Cllr Stephen Horgan reinforces that understanding when he states that “the “woodsman” sculpture is in need of repair, or removal to an indoor location.”

Notice: the implication of repair is that it could stay outside. Otherwise – “or” – it needed putting inside. So it remaining on display was a possibility. (If it were removed, there was even the prospect of a new piece of art for the square, suggesting that King Edgar’s Head by Dave Chapple might be a possibility.)

In October 2008 a further press release was issued which requested design ideas for the lighting column to replace “The Woodsman”. Cllr Kevin Blake is quoted saying: “We asked the public whether they wanted to see the woodsman replaced, and it seems only right that we now give people the opportunity to send in their ideas of what they think a new lighting column should look like.”

It is an interestingly constructed sentence – a PR professional’s top piece of spin.

See how the second part of the sentence implies the result of the first, but without saying what the response to the survey actually showed? The survey probably did show the result they reported. However, details of it are nowhere to be found on either Basildon District Council’s website or Basildon Renaissance  Partnership’s website. I have written to the Council and requested a copy just so we can see how many people took part and exactly what it showed. I will of course share it here when it is forthcoming.

As you can see, public art is out the window now. Lighting columns are in. (Later still, in April 2009, I voted at Cabinet to accept the new money from the Government for new lighting in the Town Centre and St Martin’s Square. The Government wanting to invest in Basildon seemed a good thing. Seeing the insensitivity of the design in relation to the views of the Bell Tower, I regret how it is turning out. I wish I had also made the connection between the competition for new lighting columns, the future of “The Woodsman” and this money. I didn’t.)

Finally, in Basildon District Council’s most recent press release on “The Woodsman”, Cllr Horgan describes “The Woodsman” as “a well loved piece of public art.”

And the lighting column is now the Town Clock.

I hope the pictures below shock you as much as they shocked me when I found them waiting in my inbox.

They were taken yesterday afternoon.

They show how Basildon District Council stores “The Woodsman”, that “well loved piece of public art” which Cllr Horgan believes will be appreciated by “hundreds of thousands” in Wat Tyler Country Park – a piece of art that in the Council’s own words “was never meant to be outside for long periods” and needed “extensive treatment”: 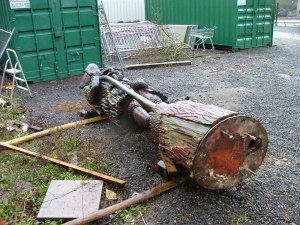 It is nothing short of vandalism.  Cllr Michael Mowe is a Conservative councillor who condemns “brainless vandalism” – and very rightly so. I wonder what questions he will now be asking of his own Conservative administration? (Incidentally, vandalism can be reported to Basildon District Council on its website and even by mobile phone. Perhaps the Council’s own acts of vandalism should be reported?)

To my mind, though, questions and emails and letters are useless. This Conservative administration has determined its priorities – and this is how it treats a “well loved piece of public art”.

Contrast that with £38 million for a Sporting Village.