Sometimes something can simply not feel right.

Remember the phasing out of Morse Code? It just didn’t sit comfortably.  You can’t argue the case, because the “experts” tell you that it’s been superseded by technology. You feel foolish when it’a pointed out how antiquated it all is. The tech “expert” is the conversational equivalent of the l33t gamer and trying to tell them how to play is going to get you pwnd like a n00b.

Yet, deep inside, the armchair captain in you still knows that when the the computer, the radio and the satellite link-up have failed, you would take more comfort from knowing you could still communicate at a distance with a flash light than from the extremely-expensive-but-now-useless box of WEEE now adorning the bridge. Finally, and long after you’ve been laughed out of the room, a story like that of the MN Rocknes pops up and reminds you that sometimes the old ways of doing things have a flexible benefit all the clever tech in the world can’t beat: Filipinos communicating with Norwegians through the hull of a capsized ship in Morse Code. Now it is the turn of the 350-year-old cheque to be unceremoniously phased out in favour of as yet undeveloped alternatives. 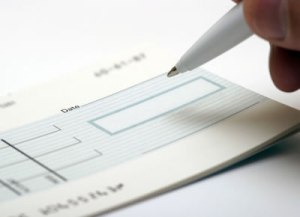 When the Payments Council tried this last year, it found itself facing a less than positive response from small businesses who agreed cheques were inconvenient, but pointed out there wasn’t really a well-developed alternative. It would seem the “experts” in the Payments Council are giving “customer forces” a little nudge in their preferred direction, because, let’s face it, there really isn’t any alternative to a cheque, is there?

Aha, the technorati cry, there are plenty of alternatives! E-mail money transfers! Online payment systems! We can even use our mobiles as alternatives to cheques!

And so this time around, the Forum for Private Business has rolled over.

Thales is a company that knows a thing or two about electronic communications and financial transactions. They’ve been doing fancy things with MasterCard and something called Advanced Authentication for Chip. Their strategy manager is a chap called Steve Brunswick. It is clear from his blog that even people like Steve haven’t got a clue how they are going to solve this one, really. He makes the brilliantly insightful observation that “Repaying a friend or paying a plumber or gardener for example will be problematic without cheques.”

Whoa! I’d not thought of that! (I’d say your cheque is in the post for Insightful Blog Post Of The Week, but hey, it’s a weak gag.)

What we have here is a familiarly depressing example of how very different groups of people – with very different needs and expectations – participate in the same discussion, but to very different ends. Our “experts” talk in the language of Module Based ID Encryption and “P2P mobile payment solutions” (see Steve’s blog link again for that one). Meanwhile, Mrs Trellis of North Wales doesn’t want to send cash through the post, only has a basic mobile, doesn’t use the internet, but does want to pay that nice chap on the market to frame her pictures and does want to send little Berthog £10 for her birthday. (Berthog is a Welsh name that means “wealthy”. And it is a “her”.)

What does she choose? A cheque.

In the meantime, the Payments Council forces the pace of the getting-rid of a method of payment that is a better leveller of the means of financial exchange than anything other than cash.

I had hoped to point out the finer distinctions between Mrs Trellis and the characters that make up the Board of the Payment Council. Easy enough, I thought.

By contrast, the Board of the Payments Council is a very different kettle of fish. Curiously, for an organisation which is concerned with all things paymenty, they are very coy about what they are paid.

It is probably a voluntary organisation.

It currently has no Chairman.

So next on the list, by unhappy alphabetical accident, is Michael Alexander, one of the Payment Council’s independent directors. Michael is also Chairman of the Association of Train Operating Companies, Chairman of TGE Marine AG, Non-Executive Director of Costain Plc, and a member of the European Advisory Board for Landis and Gyr. After several hours of looking, I’ve pretty much given up trying to establish Michael’s weekly take-home pay. Like the Payment Council, there is a general coyness around the sums of money involved. Perhaps they are all voluntary positions. However, deep inside (!) I can’t help feeling that it is probably a little more than £185. Something tells me, too, that it’ll probably be equally hard to obtain the figures for the rest of his colleagues. (My apologies to Michael Alexander – I am just attempting to make a point about the different worlds in which this same conversation is taking place.)

None of this rambling post is meant as an attack on business or somehow a criticism of companies that I am sure will all play a key role in the UK’s recovery from recession. It is, however, trying to point out that the needs of a commercial world that trades in bits and bytes is very different from that of an impoverished pensioner in a part of the country where she may still be struggling to get Channel 5.

The cheque, physical, simple and technologically challenged, is trusted almost as much as cash by those who live simpler, ordinary lives.

And when the cheque goes?

Perhaps it is time to reinvigorate the Postal Order for the 21st Century. For those who are prepared to make the leap to the web, the Postal Order could provide a secure vehicle for non-cash transactions, requiring the sharing of bank/card details with a single provider: the Post Office. Those not comfortable dealing electronically could purchase them from the Post Office, perhaps through little dispensers (like parking ticket machines only rather more pleasant). Properly coded it could place little strain on the banks, provide an approximate solution for those who fear the increasingly virtual nature of our money, and reinvigorate a failing Post Office network at a time when rural and urban  communities alike are looking for a stable community focus.

Finally, late as it is, and prone to conspiracy theories as I am, I will simply remark on the curiosity of discovering what a small world it is. I began this piece knowing nothing about Thales or ATOC. It was only in the writing that I noticed that the former – specialists in cashless, virtual transactions – and the latter, which shares its Chairman of the Board with the Payments Council, have already done a deal of business together. National Rail Enquiries, which is run by ATOC, awarded Thale the contract to design, build and operate DARWIN, the National Real Time Database (NRTD).

I am still learning about how the world of business works.

P.S. Some interesting stuff about cheques:

P.P.S. In a further vindication of older technologies, you might recall the story about the Australian museum that staged a run off between an old-school Morse Code telegraph operator and a mobile-phone-using teenage texter?

Go on… You know who won!