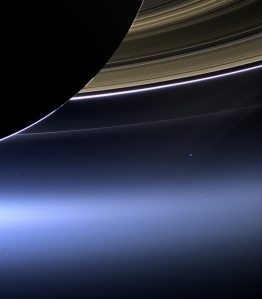 On 23rd July, NASA published a picture of Earth taken from the dark side of Saturn by its Cassini spacecraft. It is, apparently, only the third time that Earth has been photographed from the outer reaches of the solar system. The picture was taken in a photo session of Earth that occurred on 19th July between 2:27 to 2:42 pm PDT (9.27 to 9.42 pm in the UK). We have the technology to take that kind of picture from almost 900 million miles away.

Look at that amazing picture and think about it just for a moment.

I was eating my tea, having walked home through Gloucester Park after a trip to the cinema and a showing of Pacific Rim. It had been a beautiful evening – I posted a picture on Facebook – and I spoke to Laura on my way.

Suddenly, we all seem very insignificant.